Finding the right names for things is an art. Speak to most content professionals and they’ll tell you that naming can be hard. Fun, but hard. Some naming exercises require creativity and originality, such as coming up with the name for a new product. However, other naming tasks come down to logic and clarity. Design systems fall into this second category. Naming components is less about originality and more about ease of understanding and standardization.

Why should we care about naming in design systems? 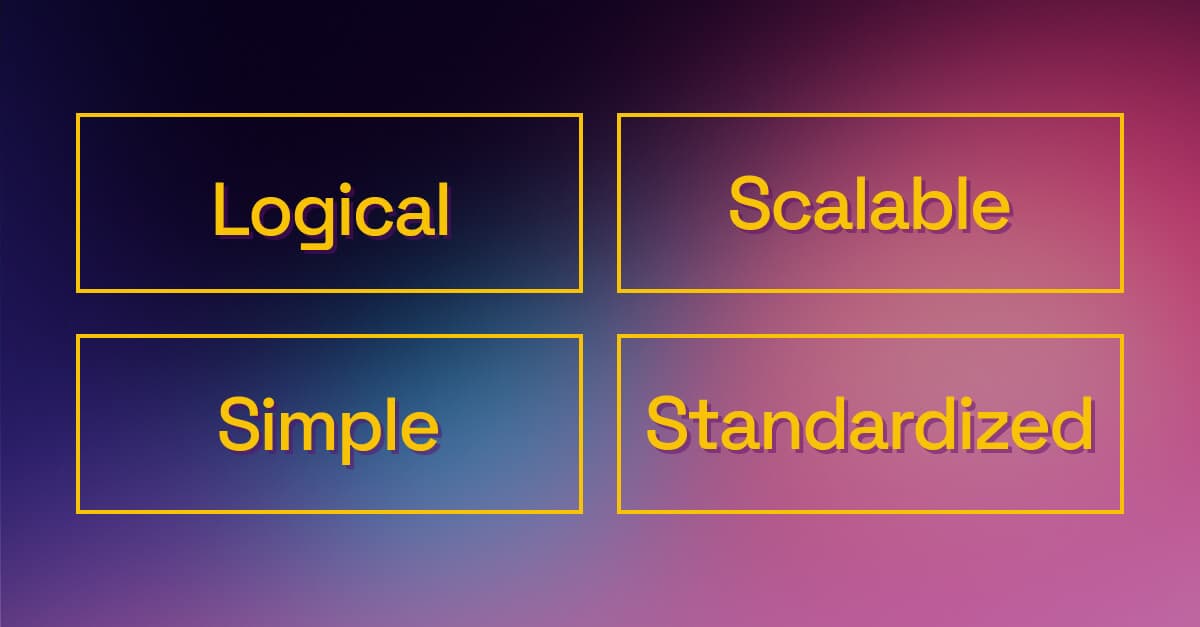 Best practices for naming elements in a design system

When thinking of names for any part of your design system, keep in mind that they should generally be:

Some decisions to make when naming

States: The different states of a component need names, too. It’s important to follow the same best practices above and find names that are logical and standard, or otherwise clearly defined. The most common names for component states include:

Colors: While it seems counterintuitive, colors ****should not take the name of the actual color itself (blue, red, green), but one that represents its function. If your product or company were to undergo a full rebranding, for example, it’s likely the colors will change, forcing you to rename every single color token. Plus, using the actual colors as names doesn’t give design system users any indication of when, where or how to use that particular color. Instead, the most common names for colors include:

Breaking down a component’s name: Most components typically have several types, variations, states and even themes. It’s important to clearly organize the name of components to reflect these differences, using a forward slash to break it down:

Alignment across all design system tools/programs: More than a decision to make, this is a step to take when tackling naming. Developers and designers typically use different tools to work on a design system. Plus, there is the documentation site. It’s all too common to find components in Storybook called one thing and those same components in Figma called something else. Certain tools, like Backlight, keep code, stories, design and documentation in one place. This makes it much easier to maintain alignment across component naming. However, it’s still a team exercise that requires consensus and alignment on names, making sure they’re consistent across all tools used to build the design system.

So, where to begin?

If you’re starting a design system from scratch, you have the perfect blank canvas to start naming components following the guidelines above. However, it’s more likely that you already have a design system in place, and that some names are unclear, inconsistent across tools or need a little attention. A great place to start is with a component naming workshop with your design system team. Do an audit of everything you have and see where these naming conventions can be applied. Another approach is to benchmark other design systems. We’ve curated a list of some of the best design systems to turn to for inspiration. Take 2 or 3 design systems and see how they organize their categories, structure their components’ names and reference their design tokens. Pick a method that works best for your team and design system, and stick to it. Bonus: if you have a UX writer or content designer in your team, ask them for help! It’s yet another example of how content design practice can benefit your design system.

Any good naming conventions to add to these? Tweet us!